Jim Kanter was the leading solo clarinet artist in the Los Angeles film studios until his retirement in 2007. Jim took part in over a thousand motion picture scores and hundreds of television shows. Motion pictures on which he can be heard include ET, Benny and Joon, Nine Months, Schindler's List, As Good As It Gets, Beauty and the Beast, Aladdin, Hercules, Mulan, and many more. In addition, he was Principal Clarinet with the Pacific Symphony Orchestra and Pacific Symphony Chamber Players. Jim also has considerable pit experience with companies such as New York City Ballet, Kirov Ballet, Bolshoi Ballet and Paris Opera Ballet.

In addition to his very active playing career, Jim finds time to conduct masterclasses throughout the USA and Canada. For many years Jim Kanter made clarinet mouthpieces which are being used by prominent orchestral, jazz and studio players all over the world.

Jim Kanter has played Peter Eaton International model clarinets since 1994 and bought a second pair in July 2000. "These are beautifully made instruments with a wonderful sound. For me they are without equal, nothing sounds or responds quite like them." 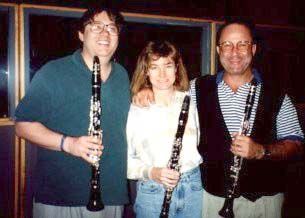 Jim Kanter on the right, with Debbie Kanter, Ralph Williams and their Peter Eaton International clarinets, at a recording session for the Disney motion picture Pocahontas in 1995.