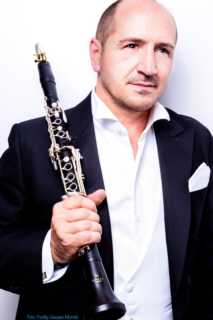 Pierluigi was a student of the late Jack Brymer and a recipient of a gift of two of the former LSO Principal's Boosey & Hawkes 1010 clarinets. Pierluigi was Brymer's last official pupil.

"Jack Brymer was more than just my teacher. He was, and still is, my role model not only as a musician and clarinettist but also as a human being. I owe him many things including my love for the traditional English large bore clarinet.

The characteristics of tone, dynamic range and stable intonation of the B&H 1010 have been surpassed by Peter Eaton's wonderful instruments. Jack once told me in 1989, following his retirement from the LSO, that if he had carried on playing in the orchestra he would have chosen to play on Peter Eaton clarinets. His words formed a seed back then and all these years later I must say that as usual he was right in his assessment.

Thank you Peter for finding me my perfect partner. I would be lost without your clarinets. In whatever country, every concert is greeted by someone commenting on the beauty of the sound of these superb instruments."