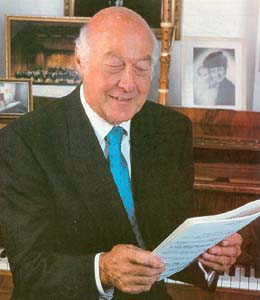 Jack Brymer, who died on 15 September 2003, was one of the outstanding British clarinettists of the post-war era. He was invited by Sir Thomas Beecham to become Principal Clarinet in the newly formed Royal Philharmonic Orchestra in 1947, a post which he occupied until 1963. After this, he was appointed Principal Clarinet in the BBC Symphony Orchestra until 1972 when he took up the same position in the London Symphony Orchestra.

Throughout his career Jack Brymer was active as a soloist and in chamber music. He recorded most of the major works written for the clarinet including four versions of the Mozart Concerto, with Sir Thomas Beecham, Sir Malcolm Sargent, Sir Colin Davis and Sir Neville Marriner. Another highlight was the highly successful series of recordings as director of the London Wind Soloists.

As well as his work as a performer, Jack Brymer was distinguished as a teacher and gave masterclasses in Europe, USA, Canada and Australia. He was professor at the Royal Academy of Music, Guildhall School of Music and the Royal Military School of Music, Kneller Hall. He had several honorary degrees and was awarded an OBE in 1960.

Jack Brymer took a close interest in the development of Peter Eaton clarinets from the beginning, having played a pair during his last months in the LSO. For him they were quite simply "the finest clarinets in the world."