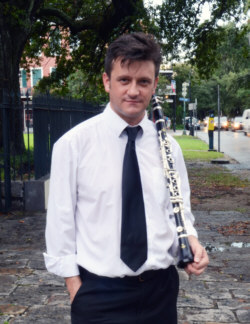 Born in 1971 in North Wales, James Evans took up the piano at age 6, clarinet at age 12 and sax at 16. James attended the jazz course at Leeds Music College. He graduated in 1993 and started touring Europe with Phil Mason's New Orleans All Stars. In 1996 James left the Mason band to work freelance. He moved to London in 1998 and since worked with the Boston Tea Party, Keith Nichols Cotton Club Orchestra, Sammy Rimington, Chris Barber, Ken Simms, Alan Barnes, Martin Lytton and Barry Martyn's Young Bloods. James also played rhythm and blues with Angela Brown and the mighty 45s and the New Orleans style R & B Ginger Pig Band.

Whilst in the UK James ran four groups of his own: James Evans New Orleans Wizards, James Evans Incredible String Four, Rocket Five, and James Evans Octupal Odysse, which featured James' own compositions, and played many festivals across the UK. This included, in 2010, a performance of James compositions and arrangements played by his String 4 accompanied by the Welsh Chamber Orchestra.

In Febuary 2013 James moved to New Orleans to pursue his lifelong love of the city and its music. Since his arrival he has played with many local luminaries such as Leroy Jones, Steve Pistorius, Seva Venet, Lucien Barbarin, Tim Laughlin, Gerald French, Duke Heitger, Lars Edegran, The Shotgun Jazz Band, Smoking Time Jazz Club, Tuba Skinny, and many more, and has appeared venues such as Preservation Hall, The Palm Court Jazz Café, and many of the music clubs around the town, as well as the New Orleans Jazz and Heritage Festival. James plans to record his own compositions again soon.

James has played a Peter Eaton Elite clarinet since 2014. "It is by far the best clarinet I have ever owned. It has the lovely open sound and the flexibility of an English large bore clarinet, which I find perfect for jazz playing. It also gives me a pure classical sound when I need it. The tone is very big and rich and the intonation is excellent. The key work is silky smooth and very well designed. The Peter Eaton mouthpiece compliments the instrument perfectly, tonally, and in intonation. Thanks Peter".