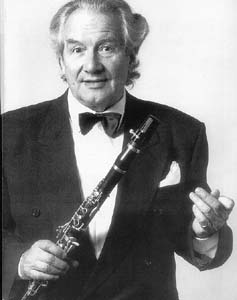 Gervase de Peyer, who died on Friday, 3rd February 2017, was one of the finest musical interpreters of the second half of the 20th century, on any instrument. In addition to performances and recordings of the standard clarinet repertoire, he has premiered at least ten concertos, some of which are dedicated to him, including works by Berthold Goldschmidt, Alun Hoddinott, Joseph Horovitz, William Mathias and Thea Musgrave. Gervase de Peyer has also premiered and recorded many other works such as the Francis Poulenc Sonata and the Joseph Horovitz Sonatina as well as chamber works by Robert Simpson, Malcolm Arnold, Nicholas Maw, Arnold Cooke and Elizabeth Maconchy. His recording awards include first prizes from the Academy Charles Gros (Spohr and Weber Concertos) and The Plaque of Honour from the American Academy of Arts and Sciences (Mozart Concerto). These are available on Decca/Polygram CD's.

Maestro Josef Kripps selected Gervase de Peyer as his principal clarinettist for the London Symphony Orchestra in 1956, a position he held for seventeen years whilst continuing an active solo and chamber music career. Several early chamber music tours for the Arts Council of Great Britain led to his leading role in the formation of the Melos Ensemble of London. Gervase directed the Melos Ensemble's extensive recording programme for EMI and these highly praised recordings are now happily available on CD.

From 1969, his LSO position and the success of the Melos Ensemble overlapped his engagements as a founder member of the Chamber Music Society of the Lincoln Center, a group he performed with for twenty years. This engagement eventually resulted in his making New York his home. Amongst many distinguished colleagues were Jaime Laredo, Richard Goode, Paula Robison and a succession of guest artists including Itzhak Perlman, Andre Watts, Kyung-Wha Chung, Pierre Boulez and Leonard Bernstein.

In a sleeve note for one of his recordings released on the Chandos label in 1987, Gervase wrote that on those recordings he used a wide bore clarinet and continued:

“The sound of this clarinet is indeed different from its brethren with smaller, narrower bores, since there is more scope for flexibility in the production of its sounds; for floating a pure, clear and light sound across a resonant space, and for varying the colour of the sound to enhance vivid and communicative phrasing in performance. Nothing is ever perfect, but this writer and performer is convinced that some of the finest artistic results in clarinet playing can be achieved with instruments of this type. Fine examples of a new range of such instruments can currently be found in London.”