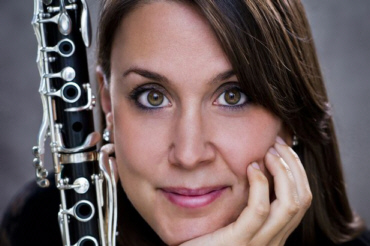 Katherine Lacy was appointed principal clarinettist with the Royal Philharmonic Orchestra in November 2014, following a short period with the BBC Symphony and eight years with the Royal Liverpool Philharmonic Orchestra. As a busy professional, Katherine has enjoyed working as a guest with other orchestras, on clarinet, E flat, basset horn and bass clarinet, and has recently performed with orchestras including the LSO and London Sinfonietta. In the past few years she has also played guest principal clarinet with the Northern Sinfonia, BBC Symphony Orchestra, London Chamber Orchestra, CBSO and the Ulster Orchestra.

Whilst in the RLPO, Katherine gave performances of the Weber Concertino and the string orchestra version of Finzi's Five Bagatelles in 2008. In 2010, she performed the world premiere of Spinning and Weaving for solo bass clarinet and ensemble by Ian Gardiner, with the RLPO's Ensemble 10/10, at the Wigmore Hall. She has also performed clarinet concerti with the National Chamber Orchestra of Wales, Opus One Chamber Orchestra, Wrexham Symphony Orchestra, Maerkischer Kreis Youth Orchestra (Germany), Lydian Orchestra of Kent and the RAM Sinfonia. Recently Katherine played Lied by Berio for solo clarinet as part of a London Sinfonietta concert at the Purcell Room.

Katherine gave the world premiere of Veni Creator Spiritus for flute and bass clarinet by Peter Maxwell-Davies, with the late Sebastian Bell, in 2002. She has made guest appearances with Ensemble 360, Zephyr Wind Quintet and the Linos Wind Quintet (including a Wigmore Hall recital).

Katherine has played Peter Eaton Elite clarinets since 1998 and bought a second pair in 2015. "I swapped to Peter's instruments at an important stage in my musical training and I believe the quality of the clarinets played a crucial role in helping me achieve my ambitions. I can't imagine playing on any other clarinets. I love the clear, rich sound they produce."

We made a basset clarinet for Katherine during 2015, in conjunction with that wonderful craftsman Tony Ward. This will be the second Elite model basset that we have made, following the one that we made for Emma Johnson in 1998. Since then we have made four International model bassets, for Michael Collins, Mark Simpson, Anna Hashimoto and Jordan Black.

Katherine recently recorded the Mozart Clarinet Concerto and Quintet for the RPO label. Chris Walters, editor of the magazine Clarinet & Saxophone reviewed it for the March 2019 edition of the magazine.