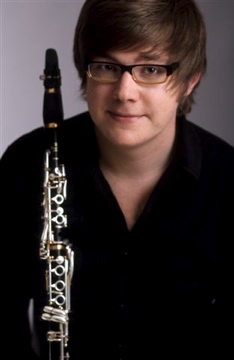 Mark was born in Liverpool in 1988. In 2006, aged 17, Mark Simpson became the first ever winner of both the BBC Young Musician and BBC Proms/Guardian Young Composer of the Year Competitions. He went on to read Music at St. Catherine's College, Oxford, graduating with first class honours, before undertaking postgraduate studies in composition with Julian Anderson at the Guildhall School of Music and Drama. He has studied clarinet with both Nicholas Cox and Mark Van der Wiel and plays Peter Eaton clarinets.

Now emerged as a major new voice, both as a composer and clarinettist, in 2012 Mark was selected for representation by YCAT and became a BBC Radio 3 New Generation artist He went on to embark on a full publishing relationship with Boosey & Hawkes, and in 2014 won a Borletti-Buitoni Trust Fellowship award. He was also the recipient of the 2010 Royal Philharmonic Society Composition Award, which led to the premiere of a new ensemble work, Lethe, at the Royal Festival Hall, London. In 2015 Mark was appointed Composer in Association with the BBC Philharmonic, a position he will hold for four years.

Mark's recent commissions include Israfel for the BBC Scottish Symphony Orchestra and The Immortal, a 35-minute oratorio commissioned with support from Sky Arts Futures Fund and IdeasTap that was premiered by the BBC Philharmonic and Exaudi under Juanjo Mena at the 2015 Manchester International Festival. Of the work, Times critic Richard Morrison said "Mark Simpson's oratorio The Immortal is the most thrilling new choral work I have heard for years. At 26, what a prospect he is".

Other recent commissions include Sparks, which was premiered at the Last Night of the Proms by the BBC Symphony Orchestra; Exile for the National Youth Choirs at the Royal Albert Hall; Salvator Mundi for the Choir of Christchurch Cathedral, Oxford; Geysir for Britten Sinfonia and Night Music for cellist Leonard Elschenbroich, first performed at the Wigmore Hall, London. His orchestral work A Mirror-Fragment received its London premiere with the BBC Symphony Orchestra at the Barbican in April 2013.

A fellow of the Jerwood Opera Writing fellowship scheme, Mark is currently working with writer Melanie Challenger on Pleasure, a new opera to be premiered by Opera North with performances in Leeds, Liverpool, Aldeburgh and London in 2016. Forthcoming composing projects also include the first of a series of orchestral commissions for the BBC Philharmonic as part of his residency and a new work for the Gould Piano Trio's 25th anniversary celebrations in 2017, supported through Beyond Borders and the PRS for Music Foundation.

As a clarinettist Mark is passionate exponent of new music, having performed and recorded Magnus Lindberg's Clarinet Concerto with the BBC Symphony Orchestra and John Adams's Gnarly Buttons with the BBC National Orchestra of Wales. He has performed the Nielsen Clarinet Concerto at the 2015 BBC Proms with the BBC Symphony Orchestra and Sir Andrew Davis, and has also appeared as concerto soloist with the Royal Liverpool Philharmonic, Royal Northern Sinfonia, BBC Philharmonic, City of London Sinfonia, BBC Concert Orchestra and Northern Chamber Orchestra, among others, with conductors including Vasily Petrenko, Gianandrea Noseda and Yan Pascal Tortelier.

In 2011, Mark's debut CD was released on the NMC label, featuring newly commissioned works by Patrick Nunn, Mark-Anthony Turnage, Gary Carpenter, David Horne, Kenneth Hesketh, Gavin Higgins, Emily Howard and Stephen Pratt. He has also performed as part of a Julian Anderson day at the Wigmore Hall, London. Further recital appearances as clarinettist have included the Royal Festival Hall, the Sage Gateshead, and at festivals including Aldeburgh, Cheltenham, Bonn Beethovenfest, Mecklenburg-Vorpommern, Trasimeno, Lammermuir and Spitalfields, with premieres of works by Simon Holt, Jonathan Harvey and Edmund Finnis. He has also undertaken residencies at the Banff Centre and in Denver, Colorado.

Mark has played Peter Eaton International model clarinets since April 2004. We also made a basset clarinet for him, in conjunction with that wonderful craftsman Tony Ward, for performances of the new works for basset clarinet that Mark has commissioned and recorded.