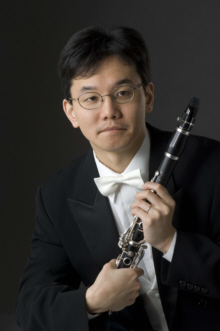 Yoshinori Mikame is principal clarinettist with the Sapporo Symphony Orchestra, Japan. He joined the orchestra in 2000 and was appointed principal in 2006.

Yoshinori began playing the clarinet when he was fourteen and is a graduate of the Musashino Academia Musicae and its graduate school in Tokyo. He continued his study at the graduate school of the Music University of Karlsruhe in Germany and obtained a master's degree in music performance. While in Germany he enjoyed many opportunities to perform. After he returned to Japan he served as guest clarinettist with the Orchestra Ensemble Kanazawa in 1998 before joining the Sapporo Symphony Orchestra in 2006. He has been active as a soloist and chamber musician and is a member of the Trio d'Anches de Sapporo since its formation in 2001 and has released a CD with the trio, awarded by the city of Sapporo.

Yoshinori has played Peter Eaton International clarinets since 2006. "The warm sound of my Peter Eaton clarinets fits perfectly with my orchestra, blending well with other instruments. They also let me play even the softest solo passages so that they project well to the audience in the back row of a large concert hall. It is fascinating that with Peter Eaton clarinets I can play music like the way I speak my own language, helped by the clarity of articulation they offer".