Ralph Williams is currently bass clarinettist with the Hollywood Bowl Orchestra (14 years) and the Pasadena Symphony (30 years). Ralph is the former principal clarinettist of the Opera Pacific Orchestra (16 years) and the Pasadena Pops Orchestra (19 years). Ralph's latest CD, Too Eclectic, was released in 2011. The new CD features traditional works for clarinet alongside new compositions by Ralph's wife Patrice Williams. He has two previously released CDs: Dreamer and Eclectic and has two videos on YouTube: Carl Nielsen Clarinet Concerto and Volga Nights for jazz bass clarinet by his wife, Patrice.

Ralph Williams has played Peter Eaton International model clarinets since 1993 and also took up Elites in 1998. "The tone quality and flexibility of timbre on Peter's clarinets gives the player a way to sing that is superior to all other makes. If you love the English clarinet tradition, then these instruments represent a beautiful continuance of that tradition." Ralph enjoys even more flexibility by having both models available, Elite and International. 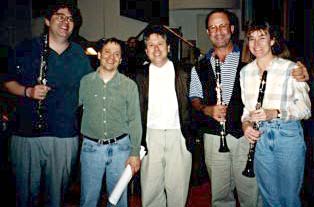 Ralph Williams on the left, with Debbie and Jim Kanter on the right, with their Peter Eaton International clarinets, at a recording session for the Disney motion picture Pocahontas in 1995. Standing next to Ralph is Danny Troub who orchestrated and conducted the music. In the centre is Alan Menken who wrote the score. Alan also composed music for other Disney films such as The Little Mermaid and Beauty and the Beast.